An evolutionary relic is a species of plant or animal that persists as a remnant of what once was a diverse and widespread population. It survived the passage of time, where their original ecosystems have disappeared. They now live in a smaller geographic area than in the past, thought to be due to environmental changes.

We now live in the Cenozoic geologic period, in the Holocene Epoch. The previous Epoch was the Pleistocene, which is the age in which Pronghorn and California Condors, along with others, lived with mastodons and saber-toothed cats. The mass extinction during the Pleistocene was the Quaternary period, which saw the loss of numerous, predominately large, animal species.

Pronghorns developed keen eyesight and speed, as a reaction to North American Dire Wolf and Cheetah, their predators of that age. There are no modern predators able to catch a healthy adult pronghorn. The California Condors may have survived because they are scavengers who do not take prey, thus making a meal of anything that dies, including land and marine mammals. When the large mammals died during the late Pleistocene extinction, marine mammals were not affected, thus giving the Condors the food needed to survive. 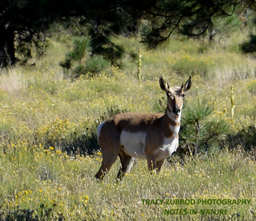